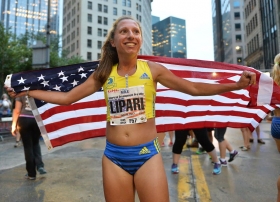 In 2019, she again won the Fleet Feet Liberty Mile in 4:34, her second title at the BBTM Grand Prix Tour event. In October, she shattered the course record with her 4:33 clocking at The Navy Mile, the BBTM GP Tour 2019 finale, and also finished Tour 2019 women's runner-up.

Lipari opened her 2018 outdoor racing season by winning her first USA title at the Grand Blue Mile, edging 2016 Rio Olympian Brenda Martinez, 4:32.87 to 4:33.07. Two weeks later, she maintained her winning ways on the roads by defending her Medtronic TC 1 Mile crown in 4:40. In August, she continued her hot streak with wins at the West Chester Mile and inaugural Guardian Mile, running 4:28.62 (track) and 4:34 (road), respectively. With 26 points, Emily also defended her BBTM Grand Prix Tour crown.

FUN FACT: In high school, Emily was more a soccer player than a runner.

Once again, Des Moines will host the USA Track & Field (USATF) 1 Mile Road Championships presented by Toyota, with some of the world's most elite runners competing for a...

Summary by Bring Back the Mile

WASHINGTON, DC - At the BBTM Grand Prix Tour 2019 finale, The Navy Mile, on a cloudy Sunday...

“The goal of the Guardian Mile has always been to provide an amazing race, great experience and bring in the top local, national and international elite athletes..."

CLEVELAND, Ohio – The second running of the Guardian Mile on Saturday is expected...

By Mike Peticca, special to cleveland.com

Based on the organization and the spirit at Saturday night's first running of...

The Medtronic TC 1 Mile defending champion, Emily Lipari, is returning to headline another...

Newly crowned NCAA Indoor Mile champion: "As my years at Villanova progressed, I realized how hard it was to win a national championship."

1) Daily Relay: Congrats on your first individual NCAA championship. The race seemed to play to your strengths. How bad did...