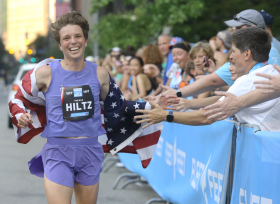 In September 2022, Hiltz set a personal best in the Mile, clocking 4:17.4 as the runner-up at the New Balance 5th Avenue Mile, and in December, ended the season at the Kalakaua Merrie Mile, finishing second (4:28).

In 2021, Hiltz won the adidas Boost Boston Games road Mile in 4:31, and in late August, she won the Downtown Yakima Mile in 4:22, the fastest Mile recorded on Washington state soil, and two weeks later, finished runner-up in the 5th Avenue Mile (4:23).

FUN FACT: Her given first name is Dominique.

“This will be my first time racing at the Millrose Games, so I am really excited as it has been a competition that I have wanted to do for a long time. I have very fond memories of racing in the City, and I cannot wait to return and tackle the same distance indoors.”

FALMOUTH, Mass. – The present and the future of middle distance running put on a show at the 26th running of the Falmouth...

RALEIGH, NC - On a warm, humid summer Friday night with a loud crowd at the 8th Sir Walter Miler, athletes had extra incentive to go after the North Carolina state Mile records held...

PITTSBURGH – At the 11th Fleet Feet Liberty Mile on a warm Friday evening in downtown Pittsburgh, the pro races ended in two thrilling finishes as Vincent Ciattei of...

By Ryan Lamppa, Bring Back the Mile...

“I’m definitely now very driven to just kind of do it all over again, make the Olympic team and then make the final of the Olympics."

What a difference a year can make. That’s true by the truckload when 2019 and ’20 are the benchmarks and Miler Nikki...

Nikki Hiltz looks back at and ahead of breakout season

Her chance to make the Tokyo Olympics is solid, but it’s Hiltz’s commitment to staying true to herself from now on that will lead her to the happiest finish lines.

“When my career is over and all said and done, I want to be remembered as more than just a good athlete. I believe this motivates me to run faster. The faster I run the more people I’m going to reach and the more lives I can potentially change.”

Nikki Hiltz sprints to 1500 gold at Pan Am Games

It turns out that Nikki Hiltz runs just as fast on international soil as she does at home.

Hiltz of Aptos cruised to victory in the 1500 meters at the Pan American Games in Lima, Peru, on...

“I think the crowd brought me home and it was a super close finish."

Nikki Hiltz made her first-ever trip to Boston to compete at the Boston Athletic Association Invitational Mile last Saturday and did what she’s been doing throughout her prestigious running...

“How you deal with the low days determines your success in this sport. It makes you who you are.”

Every runner knows that you stand on the podium alone, but getting there takes support. Nikki Hiltz aspires to stand there one day as a top-3 American Miler, but the...

Love on the Run

By Jon Gugala, Bring Back the Mile contributing writer

EDITOR'S NOTE: On June 3, junior Nikki Hiltz won the California State Meet at 1600 meters. Jon Gugala spoke to Hiltz shortly after who commented that "it was the best...