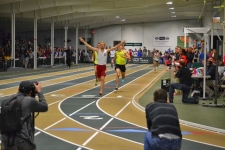 There is no other way to put it, but the 2nd Camel City Elite Races were a resounding success. The races set new facility records in 5 of the 6 races, new college facility records in 5 of the 6 races, and saw 6 athletes obtain top 10 NCAA qualifiers at the time they occurred. The Camel City Mile also served as the first stop of the Bring Back the Mile Grand Prix Tour 2014. 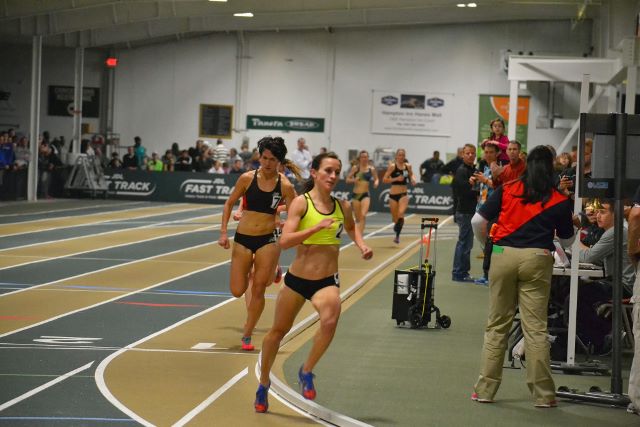 Coming into the women's race, the two favorites were probably Brie Felnagle and Charlotte Browning. Felnagle has an impressive running resume, and also was considered a hometown favorite based on her time as a North Carolina Tarheel.  Browning's status was bolstered by the fact that she ran 4:33 for the indoor Mile just the week before.  However, the race really was anyone's game, particularly with Felnagle as a late scratch due to illness.

The race was contested by only 5 women, plus Heidi Gregson (Furman Elite) taking on the pacesetting duties. Gregson was tasked with taking the pace out in 2:14 for the first 800m, and she did her job perfectly.  However, none of the contestants elected to go with her.After Gregson stepped off the track, Stephanie Garcia and Nicole Bush, both running for Furman Elite and New Balance, attacked the race, with Sara Vaughn of Brooks ID program close behind.

Men's Mile
This race was probably the most wide open of any of the fields, with four elites with comparable PRs. Miles Batty of Asics was a late scratch due to illness, further intensifying speculation on who would win the race.

The race followed a similar script as last year.  Hammond of Furman Elite, taking the role of Cory Leslie, tucked in behind the rabbit, Donnie Cowart, and gapped the field as they passed the 800 in around 1:58.  However, when Cowart stepped off the track about 1050 meters into the race, Hammond was a bit in no man's land.  He was quickly swallowed up by the field.

With 200m to go, Masters had the lead, with Phillips and Elliott close behind. There was a great race down the backstretch, as Presson also started to make a move.

At the finish, though, it was all Phillips, as he closed quickly to win the race in 4:00.94. He picked up $1500 for the win, but was unable to secure the $500 bonus for breaking 4:00. Matt Elliott overtook Masters for second, 4:01.50 to 4:01.77. Isaac Presson closed well to run 4:02.28, which converts to 3:59.23 for NCAA qualifying purposes. At the time of the race, that had him #4 on the NCAA list.  Presson will now play the waiting game to see if that gets him into the NCAA meet. Dylan Lafond of Mount Olive ran in relative obscurity in the race and finished in 4:05.53 to get an automatic qualifier for the NCAA Division II indoor nationals that will also be held at JDL Fast Track in March.