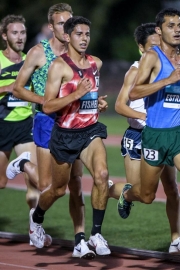 Grant Fisher, in a thrilling final stretch, finished fourth in the 2022 World Championships 10,000m, running 27:28.14 to miss a bronze medal by .18 seconds in Eugene, OR; this is the highest place by a U.S. man at the event. One week later, Grant placed 6th in the World Championships 5000m (13:11.65); unfortunately, a stumble on the final curve prevented him from competing for a medal.