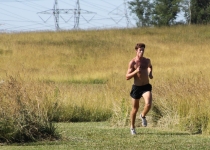 Macklin Chaffee finished third in the Medtronic TC Mile on May 10 in  field full of familiar names--Nick Willis, Garrett Heath, Will Leer--but who is Macklin Chaffee?  A graduate of Williams College.  Founder of Golden Orb, a web design and development company, and, lately, a tall middle distance runner attempting to make a breakthrough in the Mile/1500 meters.  He finished as high as second in the NCAA DIII nationals while running for Williams College, but wanted more.  A six month stay in New Zealand rekindled his desire to make his mark in U.S. middle distance running, but a serious groin injury in 2011 derailed that progress.  Coming back from a long injury layoff, Chaffee has a new coach, Jay Johnson, and desire to make his way in a crowded field of U.S. male middle distance runners who have begun to make their mark on the international scene with World Championship and Olympic medals from Matt Centrowitz, Jr. and Leo Manzano in the past two years.

The Twin Cities has played a role in his development as he ran the 2011 TC Mile and placed fourth, then stayed on in the cities thanks to "hosts" Heather and Ben Kampf, who let him stay at their place after the race. Below Chaffee talks with DtB about his goals and how he's attempting to achieve those goals.