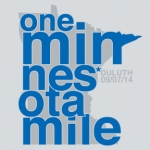 The 8th edition, with a $20,100 prize purse, is the finale of the inaugural Bring Back the Mile Grand Prix Tour 2014; final GP positions and prize money will be decided in Duluth

DULUTH, Minn. - A premier class of one-Mile runners is assembled for Sunday’s Minnesota Mile in downtown Duluth. The eighth annual event includes an elite division that features a $20,100 prize purse with the men’s and women’s winners each receiving $3000, respectively.

Kampf, 27, of Minneapolis, holds three of the top ten women’s times in Minnesota Mile history. She claimed the title in 2012 (4 minutes, 36.5 seconds), and she placed second a year ago behind the course-record-setting performance from Gabriele Anderson, now Grunewald.

On the men’s side, the top two in the Bring Back the Mile Grand Prix Tour standings are registered and are among the favorites. Rob Finnerty, 24, of Burnsville, Minn., leads Jack Bolas, 26, by two points entering Sunday’s final Tour race.

Sunday’s races begin one block east of Fitger’s on Superior Street and finish past the Holiday Center. In addition to the elite race, the event includes races for children, recreational and semi-elite runners.

The Minnesota Mile offers runners a unique opportunity for citizen runners to secure a spot in next year’s Garry Bjorklund Half Marathon, as 250 finishers will be randomly selected to receive guaranteed entries into the 2015 half marathon on June 20.

Registration for all divisions is conducted online at www.GrandmasMarathon.com. The pre-registration entry fee is $20 and late registration (September 6 and 7) is $30. The first 450 paid pre-registered entrants will receive a complimentary pair of Fitsok performance socks.

For more information, visit GrandmasMarathon.com or call (218) 727-0947. For more on Bring Back the Mile and the BBTM GP Tour, visit www.bringbackthemile.com.