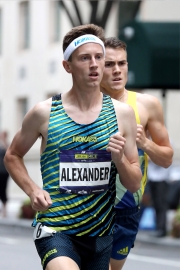 2016 saw big improvements as he qualified for the Olympic Trials, where he finished 7th in the 1500m final, clocking 3:38.90, and soon after won the Track Town Summer Series 1500m with a PR time of 3:34.88. Colby continued his 2016 breakrthough season by placing runner-up at the Aetna Falmouth Mile, finishing in 3:58.15, just .01 behind the winner and NJ*NY Track Club teammate Kyle Merber. He capped-off the 2016 season at the New Balance 5th Avenue Mile, finishing 3rd in a stellar field with a time of 3:50.3, a big PR and less than a second behind winner Eric Jenkins (3:49.3) and Olympic gold medalist Matthew Centrowitz (3:49.5).

FUN FACT: In 2016, Colby and his two NJ*NY Track Club teammates Johnny Gregorek & Kyle Merber produced the most sub-4s on the track with 5 each.

Racing fans in Northeast Ohio are in for a treat on Saturday, August 11th, as the inaugural Guardian Mile featuring a host of international elites and top local high...

PITTSBURGH – (July 31, 2015) – At the 4th GNC Live Well Liberty Mile on a warm, humid Friday evening in downtown Pittsburgh, two Milers, who are...