So much more than just a Mile

I learned an immediate lesson, right there on that track. Sometimes you do need help.

“Did you hear that a plane crashed into one of the World Trade Center Towers?” read the email from my sister as I sat at work on September 11, 2001. I was just shy of turning 34-years-old two days later… And so began a journey of a track, a watch and a goal. It was a journey filled, along the way, with highlights involving joy, sadness, birth & death and all that life gives us between those moments. It was a journey that led to personal discovery. A journey that was ultimately private and incredibly personal but one, as time moved on, from which I would (and I had to) slowly pull back the curtain and give people a glimpse within.

Running is my passion. I have both speed and strength, but I am more greatly blessed by the overall joy running delivers to me. I love the sport. I train. I compete. I coach. Without too much interruption I repeat the cycle every year. Maybe it’s being from New England, but running season-to-season is a gift. Winter, despite its harshness, is actually a beautiful time of year for long runs. When running in the woods deep into December I feel as if I am cheating time, not having to be relegated to running on the roads. Winter’s back is ultimately broken as it yields to spring. Summer’s heat replaces winter’s cold wind as the runner’s enemy, giving way to the colorful gift that is autumn. Technically speaking, September 13th is still part of the summer season, but in New England dates past Labor Day yield themselves to belonging to fall, New England’s “grande dame” of seasons. Fittingly that’s where our story begins.

Like many Americans on the days after the attacks of September 11th, I sat wondering, worrying and saddened by the horror of that day. Let’s be honest, most of America was in a catatonic state of shock during the month of September. We were collectively sad & mad, but mostly powerless. What could we do? There was no fixing the problem. There were no aid workers to be sent to help people rebuild homes and lives as is the case after a hurricane, a flood or a wildfire. There was simply massive destruction in America’s most iconic city. A physical void that palled in comparison to what was lost on that day, for those in the planes, in the towers and across the country.

What do you do when punched in the gut, leaning over gasping for air, only to look up unable to see the enemy who has vanished like a ghost in the night? People gave blood, money, prayers, support… What could I do? Could I really do anything to make a difference? These thoughts ran through my head on September 13, 2001 standing on a track in Beverly, Massachusetts as I turned 34-years-old. 1 Mile. That’s what I said. 1 Mile, under 5 minutes. 1 Mile, under 5 minutes, on September 13th. 1 Mile under 5 minutes, on September 13th, by myself. That’s what I could do. Do it for as many years as I could. That was it. It was positive, it was moving forward. I owned it.

The years rolled by. Every year the birthdays came. Most years it was one and done, under 5. A couple attempts required me to “invite” myself back to the track to get under 5. Only one year did I not do the run on my actual birthday since I was traveling on business. I completed the sub-5 a couple of days later. But year-in and year-out, a sub-5 minute Mile was in the books. Then it stopped, or so I thought. September 13, 2016. 5:06. 10 days later, 5:06. No more. What’s 6 seconds? For a Mile, it’s everything. So I stopped. It was a good run. 15 years in a row of sub-5. At 49 the body said, “Sorry, that’s too fast. Time to move on.”

December 13, 2016. Three months to the day after my birthday. An accident in Mexico nearly ended the life of a dear colleague’s husband. By divine intervention, Joseph Sharron was brought back to life on a beach in Mexico after a devastating spinal cord injury. Arriving back in New England, fighting through many setbacks, he battled to get back on his feet, despite doctors having told him he would never walk again.

Part of his recovery was asking friends and strangers to join him in his challenge by taking on one of their own. Running a marathon, learning a new language, reading the Bible, climbing all the 4000-footers in NH, and for an old guy, in Newburyport, MA turning 50, the challenge was to run under 5 minutes for the Mile again on his birthday.

September 13, 2017. Anxiety. Could I do it? One more time. I had a small window of time to get down to the track. A busy work day forced me to delay getting to the track until around 2:00pm. Entering the oval I saw that I would have to share the track with someone who was doing a workout. Not ideal. This was a private ceremony. The extremely fit young man, who could have easily been my son, jogged over. “Wow, you’re wearing spikes? Doing a workout?”

I explained to Ben, a recently graduated NCAA Division I 400 & 800 meter track athlete, the long story of how I arrived on this track on this day. He asked if he could help pace me. “What about my ground rules?” Sub-5 on my birthday BY MYSELF. I had contemplated asking the top Miler at our local high school to pace me but as the date approached I dismissed the notion of getting help.

I learned an immediate lesson, right there on that track. Sometimes you do need help. Often that help is not asked for but delivered to you. On this day, knowing the moment, and the importance of this particular Mile, I accepted. No, Ben wasn’t just there to do a workout on this Wednesday, a week before beginning his new career in Washington, DC. He was there to help a stranger achieve something special. 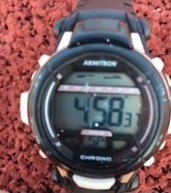 Also see Chris’ related-story “A Members-Only Race of One: The Birthday Mile”